We are the members of the large Eritrean Community who have been living in Italy for many decades, where we respect the law, we are a hard-working society, we pay taxes, we participate in politics and have right to vote as we have gained the Italian citizenship and hereby address you our deep concerns regarding the international scenario in which Eritrea is under attack in the name of Human Rights and we can see Italy has taken side with the accusers.

As you are well aware dear President,

On the 27th October 2016, the former Commission of Inquiry (COI) and the UN Special Rapporteur on the situation of Human Rights violation in Eritrea, has submitted its report to the 71st General Assembly session by finding “reasonable” grounds to believe that Eritrean official have allegedly committed “since 1991 with crimes against humanity, enslavement, imprisonment, forced disappearances, torture and other inhuman acts such as persecution, rapes and murders as part of a widespread and systematic campaign against the civilian population“.

As you also are aware, in 1991 the Eritreans were still struggling against the dictatorial regime of Mengistu and that Eritrea did not exist as a Nation and therefore this statement is untrue.

The truth is that the United Nations has treated Eritrea unjustly for sixty years, firstly by denying the self-determination when they decided for a federation with Ethiopia, a decision that the late Secretary of State John Foster Dulles in 1952 called it unfair: “From the point of view of justice, the opinion of the Eritrean people must receive consideration. Nevertheless, the strategic interest of the United States in the Red Sea basin and the considerations of security and world peace make it necessary that the country (Eritrea) should be linked with our ally Ethiopia“.

Years later in 1962, the United Nations itself closed their eyes when Eritrea was annexed unilaterally with Ethiopia and in the terrible three decades of war that followed, and they never thought to send a Special Rapporteur or a Commission of Inquiry to investigate on what Eritreans were suffering under the Ethiopian regime. More than 170,000 civilians and combatants were killed. In 1998, the UN did not move an eyelid when 80,000 Eritreans were expelled from Ethiopia and forced to abandon their properties. Another 19,000 people died in the 1998-2000 war. Finally, in addition to these insulting to injuries, the UN has been ignoring that Ethiopia, in violation of the international law, has been continuing to occupy sovereign Eritrean territories for 14 years and recently gained a sit in the Human Rights Council.

Ethiopia does not even refrains from commenting on the report of the UN Special Rapporteur on the situation of Human Rights in Eritrea: “My delegation appreciates the Special Rapporteur…” they says through his representative, “for his record as both update a member of the former Commission of Inquiry on Eritrea as well as the Special Rapporteur. We appreciate her courageous commitment and her firmness in enumerating the crimes committed against humanity in Eritrea. We wish you further success in fulfilling your duty to carry on the implementation of the recommendations of the Commission of Inquiry“.

And the recommendation of the COI said in this regard: “The Commission therefore recommends that the UN Security Council refers the situation in Eritrea to the prosecutor of the International Criminal Court under the auspices of the African Union to establish an accountability mechanism“, i.e. sending another African country, Eritrea, to the ICC (International Criminal Court) to “bring to justice those responsible for violations and abuses of human rights identified by the Commission of Inquiry, including those that may constitute a crime against humanity.”

The Eritrean representative pointed out that Ethiopia should have been found in the dock, by looking at the recent happenings to the Oromo and Amhara people and the state of emergency proclamation to better violate their human rights, the Ethiopian delegate replied that the chaos in his country is the result of the policy followed by Eritrea, “Eritrea continues to train, organize and deploy terrorists in my country, as well as in the region. Eritrea is a country committed to destabilize the entire region of the Horn of Africa continuously. This important body should be clarify that the agenda that we face are the crimes against humanity committed in Eritrea by the Eritrean government. The agenda is not the Ethiopia…”

Despite the Commission of Inquiry does not exist because its mandate was terminated on 31st of July 2016, the 31st session of the Human Rights in Geneva, where the key recommendation that wanted to bring the leaders of the Eritrean Government to the International Criminal Court was rejected, the Special Rapporteur insisted to speak also on behalf of former members of the COI returning to achieve the same outcome. For the Special Rapporteur Eritrea should serve as an example to all: “We need to bring the perpetrators of these crimes to justice not only for the sake of countless Eritrean victims, but to show that such behavior is simply not acceptable anywhere in the world today.”

By interviewing 500 alleged Eritrean refugees as anonymous witnesses in camps in Ethiopia, with the complicity of the Ethiopian government, the report of the Commission of Enquiry and the Special Rapporteur does not represent the reality of human rights in Eritrea.

Several times, the COI and the Special Rapporteur have refused to talk to thousands of Eritreans living abroad, more than 300 communities and organizations, including the Eritrean Community in Italy who sent letters calling for a meeting. Furthermore, as they admitted before the Third Committee on 27th of October 2016, the Commission of Inquiry has never read 99% of the more than 45,000 written testimonies that were sent by the Eritrean diaspora. And by saying “I reject” on 21st of June 2016, 250,000 petitions signed by Eritreans were delivered to the United Nations in Geneva. On the same day, in front of the UN HQ in Geneva there were 10,000 Eritreans from all over Europe to demonstrate against the Report of the COI which is considered false and politically motivated. Yet, these striking numbers were not enough to the United Nations who have extended the mandate of the Special Rapporteur for another year.

It is clear that behind all of this there is something predetermined.

“I call on Member States to grant Eritreans access to territory and asylum procedures. I reiterate my appeal strongly to protect all Eritrean asylum seekers, to refrain from rejections and from any forcible return to Eritrea or in third countries where they are not welcome” says the Special Rapporteur. This is a very serious statement that the Community called Pool-Factor because it promotes illegal migration and draws thousands of young people attracted by the wealth of the Northern European welfare state. For years now the Eritrean Community in Italy has denounces this trafficking of human beings and seeks to find effective solutions to stop irregular migration through an information campaign in their country where young people are told that there is no green pasture outside waiting for them.

The trafficking of young Eritreans is a new form of declared war on Eritrea by the United States to encourage their ally Ethiopia. President Obama admitted it by stating: “I recently renewed sanctions on some of the most tyrannical countries including … Eritrea, we collaborate with groups that help women and children escape from the hands of their captors, we are helping other countries to intensify their efforts and we see the results already.”

When the President speaks of countries that are stepping up efforts, he alludes to refugee camps in Ethiopia that flourish every day.

In addition, the Special Rapporteur adds that the Eritreans are the most numerous among the Africans to seek asylum in Europe. The Eritrean Community in Italy however insists that the majority of Africans who land in Italy and who claim to be Eritreans are actually Ethiopians fleeing their government and pretending to be Eritreans, with the help of interpreters placed by Ethiopian NGOs in Italian reception centers, and are welcomed without too much trouble.

It is proven that Ethiopia handles all the traffic of illegal migration from the Horn of Africa. This is confirmed by the statement of Deputy Gianni Pittella, who recently traveled to Ethiopia and reported the statements of the Prime Minister of Ethiopia Hailemariam Desalegn: “In our visit last week the President of Ethiopia told us that if the EU will continue to give money to Eritrea, which Ethiopia considers a dictatorial regime, Addis Ababa will invade and there will be another million refugees on their way to Italy“. (Source Ansa)

Having said that, on the 12th of June there has been an attempted invasion of Ethiopian troops who attacked on the front Tsorona of Eritrea’s station, causing 18 deaths. On that occasion we risked the worst, we risked another war.

The Eritrean Community in Italy is categorically opposed to the politicization of human rights issues, including the appointment of the Special Rapporteur or the COI created specifically for a regime change agenda in Eritrea and encourage Ethiopia. As stated by Yemane Gebreab, Eritrean representative to the General Assembly: “Eritrea is a nation born in the struggle for Human Rights. Its number one priority is to ensure the welfare and dignity of its people.”

The Community finds the charges of human rights violations in Eritrea politically motivated and accuses the United Nations to continue being exploited by other powers on earth and using the double standard. The Eritrea Community considers that the Universal Periodic Review (UPR) is the only appropriate mechanism to address and protect human rights through the promotion of the spirit of international cooperation based on the principles of universality, impartiality, objectivity and non-selectivity. We should strengthen this sacrosanct principle.

While realizing that it is more attractive to Italy a catchment area of 90 million inhabitants such as Ethiopia, where many Italian companies are already established their businesses, the Eritrean Community is still convinced that Italy can still do something with Eritrea as well because, for better or for worse, history has linked the two countries to one another. Hence, the Community intends to act as a bridge to enhance mutual understanding between the two countries. This would be beneficial for Italy as well, starting from the good things of his past in the Horn of Africa could set a fair partnership and build a reliable partner for a better mutual future.

In light of the delicate historical moment, the Eritrean Community in Italy appeals to your Government not to take sides in favor of Ethiopia by supporting the proposals of the UN Special Rapporteur on the situation of human rights in Eritrea, but rather to give the benefit of doubt.

The Community kindly asks you to use your position and influence to work towards the end of the illegal Ethiopian occupation of the sovereign Eritrean territories in the town of Badme, which caused the 1998 war, and was awarded to Eritrea by the UN Boundary Commission (EEBC) on 13th of April 2002 as final and binding.

We also call you to urge all the guarantors of the Algiers Agreement as the United States, the African Union and the European Union, signed by the hand of your fellow Senator Rino Serri, to force Ethiopia to respect international law. As well as, we call for your efforts to promote the annulation of the two unjust and baseless sanctions imposed in 2009 and 2011. As per today, it is well known that there was no evidence or justification for imposing them or keep them in place.

The Eritrean Community in Italy kindly ask you not to take sides in favor of Eritrea but to be fair and impartial to prevent any external interference in the name of human rights, aimed to threaten its sovereignty.

Ms Nighisti Zeggai, Chairwoman of the Eritrean Community in Italy 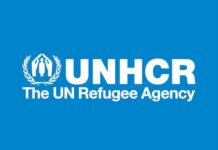 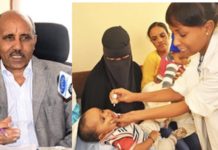 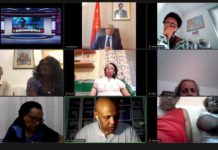 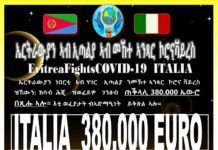 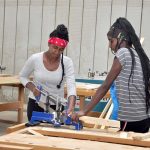 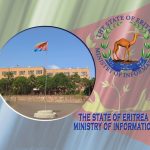